"To the sound of birches." Exhibition of works by Oleg Molchanov 408 Worte

The Russian Academy of Arts presents an exhibition of works by the Honored Artist of Russia, Corresponding Member of the Russian Academy of Arts Oleg Molchanov "To the Sound of Birches". The retrospective exhibition covers more than 35 years of creative activity and demonstrates about a hundred paintings by the successor of the traditions of Russian realistic landscape painting. The exhibition will also show photographs of sculptural and architectural projects created by the author. 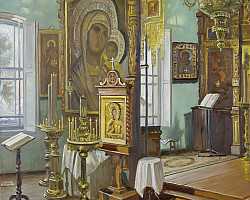 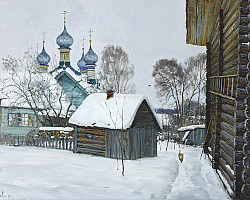 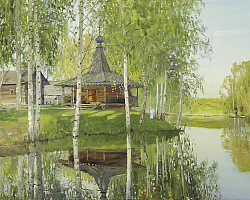 Landscape, the genre closest to the artist, is represented by both full-scale plein-air works and the complex genre of a large painting, which most fully expresses the artist’s worldview, his feelings and thoughts. The favorite season for the author was winter, as well as the off-season. The artist skillfully conveys the transitional states of nature, his favorite motives - early snow, March sun, golden autumn, foggy morning. A subtle colorist, O. Molchanov is sensitive to the slightest nuances of color changes, the movement of light and air masses, the play of chiaroscuro, the ratio of objects: trees, huts, a winter stream, each of which harmoniously and naturally exists in the space of the picture. As the writer Valentin Rasputin said about the paintings of Molchanov, "they are pure, kind, calm, quiet, disposed to thinking, to prayer, to understanding deep truths."

Oleg Molchanov has made numerous creative trips around the country and abroad. On his canvases there are revived temples and modest village churches, the majestic Baikal and the Russian North, abandoned villages and ancient cities that have retained a unique Russian flavor. A special place in the artist’s work is occupied by Ples, a small town on the banks of the Volga, which since childhood became his second homeland. Working on nature, it is important for the artist, according to him, "not to torture", "not to dry out", "not to kill a living feeling." Art critic IB Porto noted: "Oleg Molchanov has a rare gift to see picturesque, complex compositional, coloristic fabric of the image of Russian nature created by him in a landscape."

Oleg Ivanovich Molchanov was born in 1966 in the Kostroma region. Graduated from the Yaroslavl Art School and the landscape workshop of the Russian Academy of Painting, Sculpture and Architecture. Since 1997 - a member of the Union of Artists of Russia. The versatility of the artist’s interests is manifested in icon painting, restoration, poetry. Since 2000, he participated in the restoration of the Church of St. Sergius of Radonezh in the Vysoko-Petrovsky Monastery in Moscow, in 2013 - in the construction of the Tsar’s Golgotha ​​chapel in the Ipatievskaya Sloboda in Kostroma. Molchanov is the creator of several monuments, compositions. The monument to Ivan the Terrible had the greatest resonance, which Oleg Ivanovich erected in 2016 at his own expense and a donation from the regional administration of the city of Oryol for the 450th anniversary of the founding of the city. The monument to Archpriest Avvakum is also significant for the author.installed for the 400th anniversary of the birth of the "fire-protopope" in Borovsk in 2020. A striking event for the city of Lipetsk was the installation of a six-meter monument to St. Nicholas the Wonderworker (rank of Nikola Mozhaisky), made by the artist in 2021. Since 2013, Oleg Molchanov has been the host of the author’s program "Thoughts on the Beautiful" on the Soyuz TV channel. During this time, about 300 issues about art and culture workers of the country were released.

Participant of art exhibitions in many Russian cities and abroad: in Germany, USA, Montenegro and other countries. Molchanov’s personal exhibitions, which took place in Bremen and Hamburg, Washington and Moscow, Kiev and Kursk, have always been of constant interest among viewers.